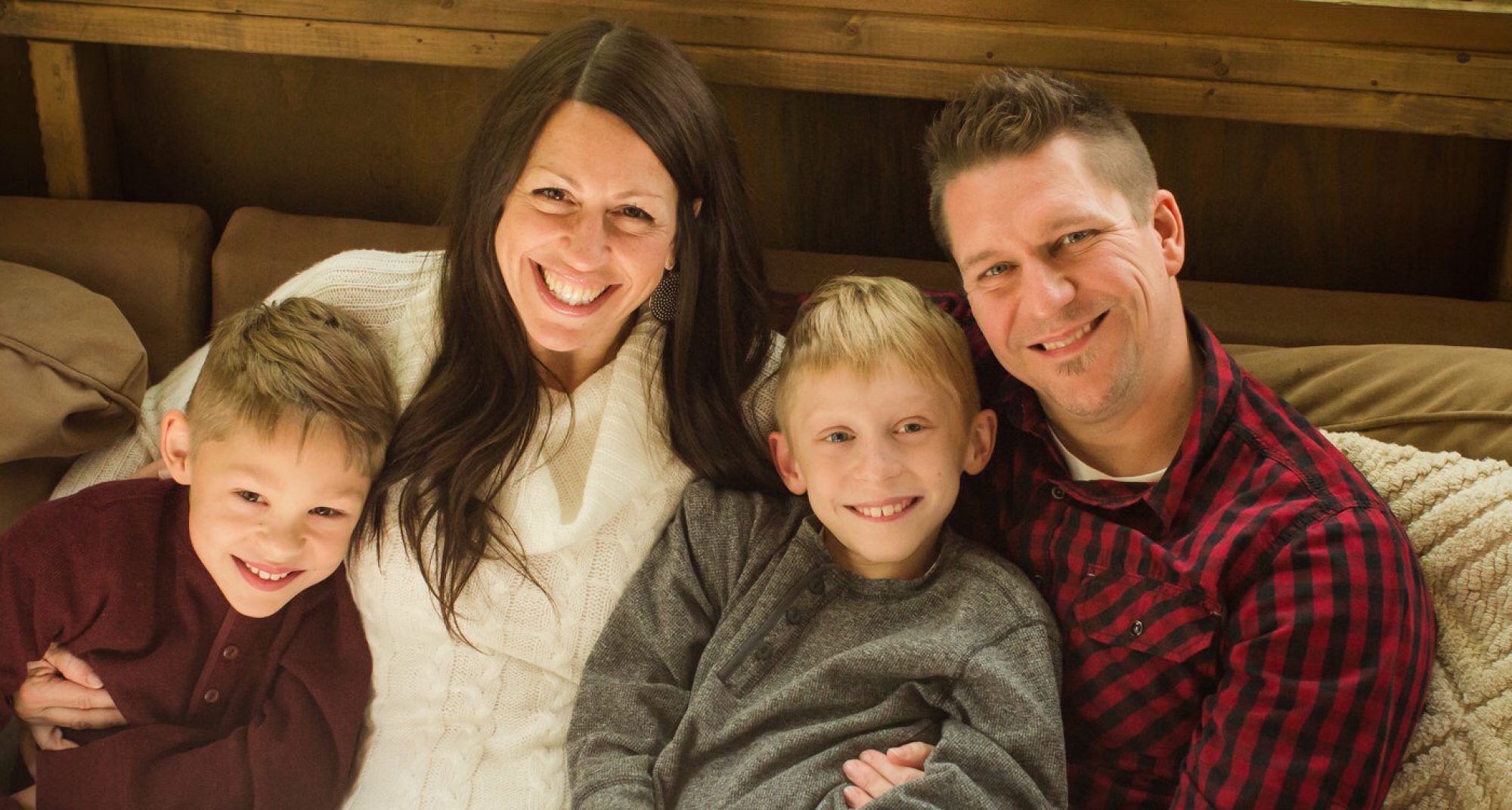 Friday morning was a lazy morning. We had done SO many fun things in Vegas…and now we were wiped. 😉 Joe made more phone calls, and though very complicated, plans to get home were starting to take shape. But after laying around the hotel room and hanging around the coffee shop in the lobby, we were ready to venture out.

My parents told us about an indoor amusement park, in one of the hotels, called “Adventuredome.” When it’s 111 degrees out, you are looking for stuff to do indoors! We took the boys over there to ride some rides, play some games, and move around a little bit. Boy…did we get more than we bargained for!

First of all, I must mention that Aiden was finally tall enough to drive the bumper cars by himself!! Yay!! He is our car guy and he has sat patiently with one of us adults for years while we drove on the rides. But this time – it was his turn! That alone was SUPER fun!

After the bumper cars, we decided to try out a roller coaster we saw wizzing by a few times called, “El Loco.” I thought, “How ‘loco’ could it be at a kid’s amusement park…”

We walked up to the line and there were plenty of little kids riding the ride. So, this mom should be ok, right? …RIGHT???

It was fun that the four of us could ride in the same car. But as we were getting strapped in, I started looking around and thought, “Hmmmm…”

Here’s me trying to be brave for the boys: 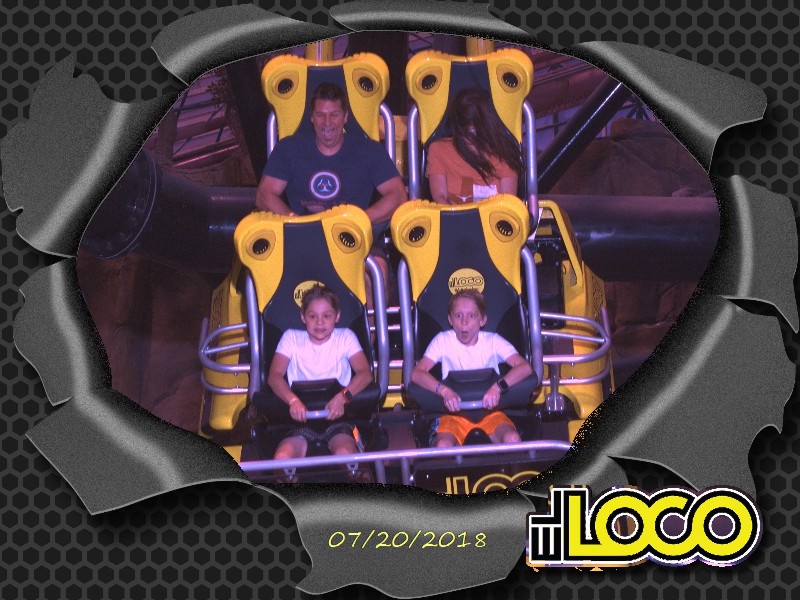 This picture (which we had no idea about) was taken at the NINETY DEGREE DROP AT TOP SPEED!!!!!

Joe had to let go of his seat to hold my hand because I was MOANING and my eyes were locked shut!!! (It’s not easy, folks.)

The ride then takes you through crazy barrel rolls, an upside down section, and then fast 45 degree and 180 degree turns.

I haven’t done anything this crazy since driving Eleanor over the one lane bridge in Nashville!

We all laughed so hard and caught our breath, after the ride…and I needed a drink!

After lunch, we rode a few more (tamer) rides and played some games. Then we went back to the hotel for the evening’s entertainment.

When we first got our bearings in Las Vegas, my parents said they wanted to watch the boys one night, so Joe and I could go on a date. So sweet!! There’s tons to do in Vegas, but not many things are “Rated K” (for Karen). But when we were driving to the V Theatre, the night before, we passed a billboard showing one of our favorite comedians playing a show on Friday Night ONLY, at Caesars Palace – right across the street from our hotel!!! What are the odds?!?!

So we refreshed in the room and walked over. 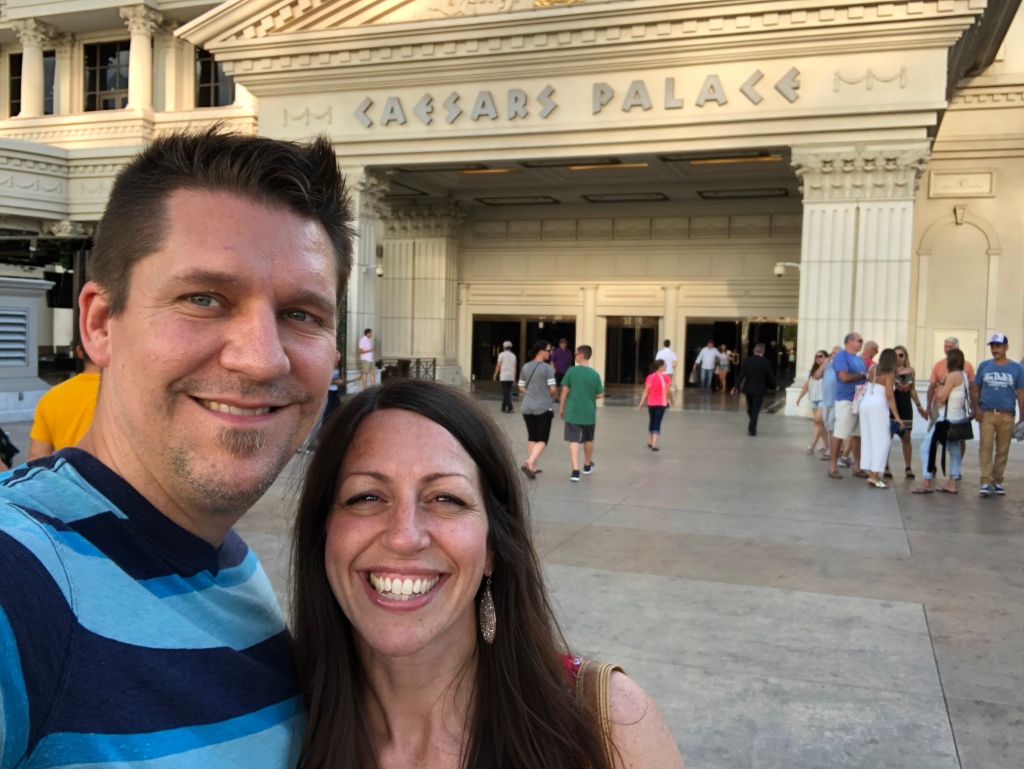 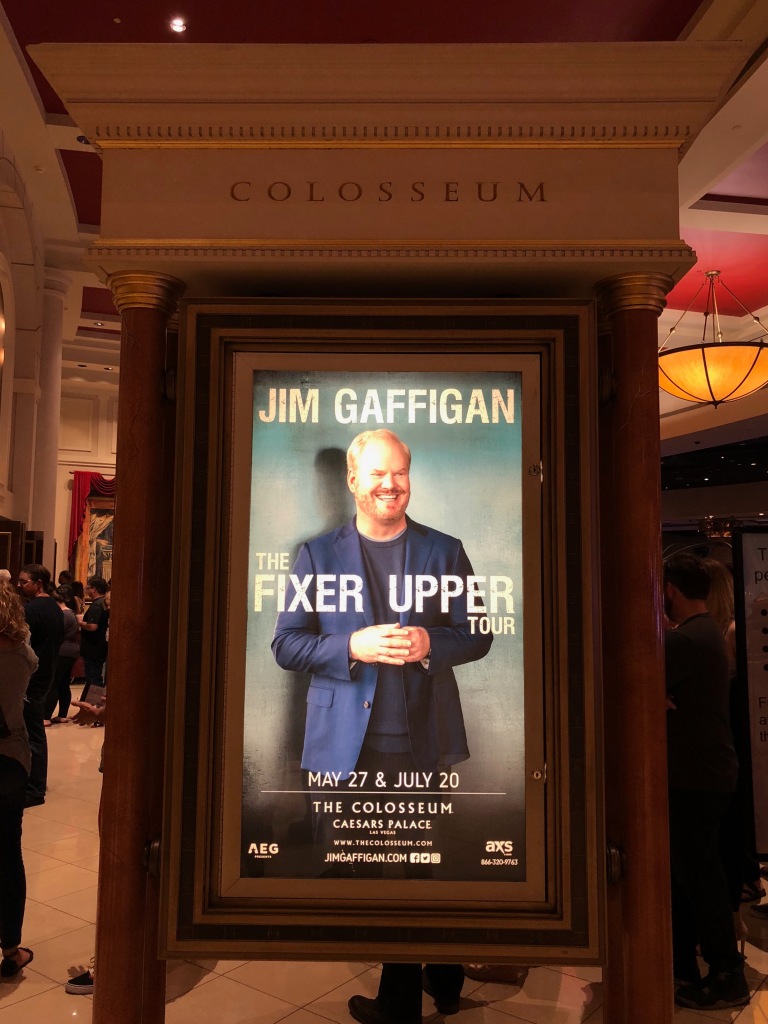 Incidentally, my parents told us that Caesars has the top-rated buffet in all of Vegas. So we decided to go there for dinner before the show. It. Was. HUGE!!! I have never seen ANYTHING like it! Every kind of food from every region you can imagine! And there was a dessert buffet the size of the entire first floor of our house! If you ever visit, you HAVE to go. It was a wild experience…and like almost everything else in Vegas…absolutely beautiful!

Look at this happy guy! ❤

After dinner, we made our way down to the Colosseum for the show. The opening act was funny, and Jim was hilarious, as always. It was great to just laugh…and forget about life for awhile.

Thank you, Gramma and Grumpa, for such an awesome night!! ❤